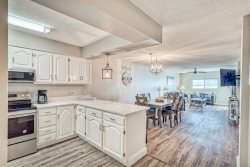 While the panhandle of Northwest Florida might be best known for the most beautiful sugar-white sandy beaches in the world, it is the fantastic weather and classic places to stay… ...places like Regency Towers at Panama City Beach that make it a wonderland just about any time of year!

There are plenty of the golden rays to go around in what is lovingly referred to as the “Sunshine State.” Panama City Beach experiences more than 300 days of sunshine per year on average — which makes the Emerald Beach and Regency Towers a truly desirable vacation location!

Panama City Beach hosts a subtropical climate, meaning the summers are long and hot and the winters are short and mild. While the humidity in this area is high due to its subtropical nature, its location directly on the Gulf of Mexico leads to constant sea breezes. The breezes keep the air moving and actually keep the temperature down in the summer, while the warm temperatures of the Gulf tend to keep the winter air rather mild. People who enjoy fun in the sun find PCB to be a cool and comfortable place to vacation year-round!

The cool season lasts for 2.9 months, from December 4 to March 1, with an average daily high temperature below 68°F. The coldest day of the year is January 26, with an average low of 47°F and high of 63°F.

While it is logical to think that the combination of constant sunshine with light sands and high humidity would lead to high temperatures soaring into the upper 90’s and maybe even touching triple digits, the constant coastal breeze blowing at 5 – 15 miles per hour leads to lower summer averages than you might think. The average high temperature in July in Panama City Beach barely cracks 90 degrees Fahrenheit.

Similarly, the constant movement of air works to keep things a bit milder in the winter. The average low in January in Panama City Beach is 42 degrees, which is why the area is renowned for its bustling population of “snowbirds” — our guests from the Northern states who book extended stays at Panama City vacation rentals from the holiday season through the beginning of spring. The warmer temperatures and moist climate, even in winter, helps lush tropical landscaping flourish here and add to the natural beauty.

Because of the temperate climate, Panama City Beach offers year-round Florida beach vacation fun. Are you eager to dip your toes into something other than a hot tub? Well, the temperature of the Gulf waters is plenty warm enough for swimming by March (average Gulf water temperature of 63 degrees) and remains comfortable and warm through November or December (average water temperature of 67 degrees). So really, unless you’re staying in January and February, go ahead and plan for swimming in the Gulf! Summer is perfect for diving below the surface for some spectacular snorkeling. The average water temperature in June through September is 80 – 84 degrees, and the water is a shimmering blue-green color through which you can see the bottom of the turquoise colored gulf waters on most days thanks to the ample sunshine.

Summers in the South — and especially here along the Gulf Coast — almost always carry a slight chance of a rain shower. Panama City Beach averages about 65 inches of the wet stuff each year. However, weather fronts rarely make it this far south in the summer months making most of these showers short in nature. The quick showers end just as quickly as they appear.

So whether you are planning to -
Panama City Beach weather is the place to be. It’s the perfect place at which to escape the cold in winter and beat the heat in the summer! We invite you to visit our perfect weather and the perfect place is Regency Towers!

The best time to visit Panama City Beach is from May through October. Though the area boasts an average of 320 days of sunshine per year, late spring, summer and early fall offer some of the warmest air and water temperatures.